Exceptional loan from the Louvre Museum

Thanks to the patronage of the ducal family and its court, the sculpture in the duchy of Bourbons knows at the end of the Middle Ages and at the beginning of the Renaissance unequaled quality. This exhibition-file takes you to the discovery of the masterpieces made by the “image makers”, name then given to the sculptors. The princely commands, the subjects of prelidection, the techniques of creation but also the often chaotic destiny of these sculptures and their delicate restoration are revealed to you. 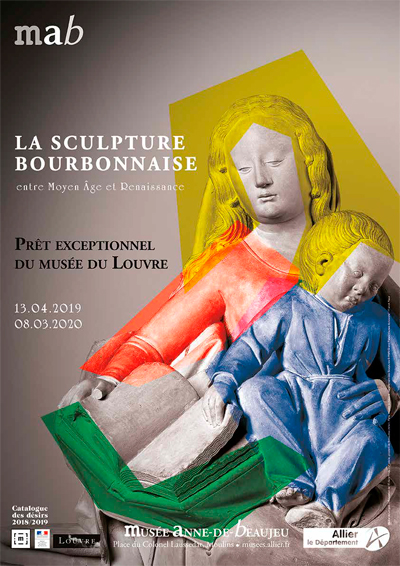 Memories of streams and canals

The department of Allier is traversed by 3 major rivers: the Loire in the east, the Allier in the center and the Cher in the west.

For millennia, rivers and rivers have formed major axes of communication, connecting Bourbonnais and Auvergne to the Atlantic and northern France. From the first unmistakable canoes to the inexplosibles of the 19th century, men and women walked these “walking paths”, as Blaise Pascal called them, thanks to boats whose names went back centuries: toue, gabarre, sapine .. .

The exhibition proposes to discover the evolution of shipping from antiquity to the 19th century by looking at both the different types of boats used, products transported and technical facilities related to the operation of the courses of water. Finally, the community of sailors will be put forward with the presentation of everyday objects as well as elements of their intangible heritage (religion, songs, stories …).

The exhibition brings together objects from several local museums, such as the Allier de Pont-du-Château barge museum, as well as national museums such as the Musée d’Orsay.